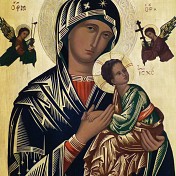 The Great Martyr Demetrius the Myrrh-gusher of Thessalonica was the son of a Roman proconsul in Thessalonica. Three centuries had elapsed and Roman paganism, spiritually shattered and defeated by the multitude of martyrs and confessors of the Savior, intensified its persecutions. The parents of…

In 740, at the time of the iconoclast emperor Leo the Isaurian, there was a terrible earthquake at Constantinople. Seeing this as God’s just punishment for their sins, the people repented and prayed to the Most Holy Theotokos and to Saint Demetrius to help them. God had mercy on them, and…

Saint Theophilus of the Kiev Caves, Far Caves and Archbishop of Novgorod, was chosen by lot after the death of the holy hierarch Jonah (November 5). He was elevated to the dignity of Archbishop of Novgorod on December 15, 1472 at Moscow. Until his elevation, he had pursued asceticism in the Otensk…

The Martyr Lupus lived at the end of the third century and beginning of the fourth century, and was a faithful servant of the holy Great Martyr Demetrius of Thessalonica (October 26). Being present at the death of his master, he soaked his own clothing with his blood and took a ring from his hand.…

Saint Athanasius of Medikion Monastery (+ ca. 814) loved the monastic life and secretly left his parental home, but was forcibly returned by his father. After a certain time Athanasius entered the Medikion monastery in Bithynia with his father’s consent. He was a companion of Saint Nicetas…

Saint Joseph was a monk of Dionysiou Monastery on Mt. Athos, where he shone forth with the virtues of monastic life. He was an iconographer, and he painted the icon of the holy Archangels on the iconostasis of Dionysiou’s main church. In obedience to the instructions of Igumen Stephen, Saint…

Saint Demetrius of Tsilibinsk (14th Century), founder of the Archangel Tsilibinsk wilderness monastery in Vologda diocese, was a beloved disciple of Saint Stephen of Perm (April 26). The monk built a church in honor of the Archangel Michael for the newly-converted. Beneath this temple he dug out a…