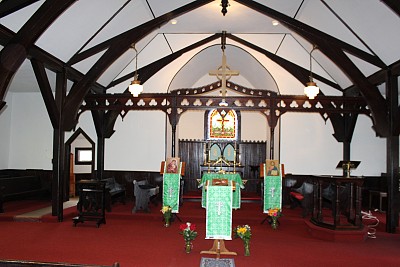 By the year 2000, several Edenton residents had taken an interest in the Orthodox Church, having learned that in the South new missions had begun opening that was attracting mainly converts. On six Sundays throughout that year and the next, ultimately ten members from three Edenton churches made trips to visit services at the two new Orthodox churches in Raleigh, All Saints' and Holy Transfiguration.

By early 2002, this interest from Edenton had come to the attention of Dr. Thomas Kehayes, an Edenton native and recently retired distinguished Episcopal priest who, with his wife, had converted to Orthodoxy and was living in Georgia.

Enthusiastically accepting his offer to teach, the Edenton group arranged publicity and reserved the Barker House for the four evenings of March 18th through the 21st; and Dr. Kehayes presented a series of talks there introducing the Orthodox Church.

The response to the talks inspired the leaders to seek to establish a mission station in Edenton. After a thorough study of the Orthodox jurisdictions during the rest of the year, it was decided to seek affiliation with the Orthodox Church of America.

On December 14 and 15 of 2002, a representative of the Edenton group met at Holy Transfiguration Orthodox Church in Raleigh with its rector Fr. Edward Rommen and with the Most Reverend Dmitri, Archbishop of the Diocese of the South, during his visit there. With Archbishop Dmitri's blessing, Fr. Edward agreed to begin teaching an inquirers' class in Edenton.

On February 2, 2003, Fr. Edward began his visits to Edenton on  alternate Sundays evenings, to the Chowan Life Center, to lead Vespers and to teach the class. Under the leadership of Fr. Edward and Mo. Ainee, his wife, the group began to learn to sing the services.

Under the leadership of Fr. Andrew and Mo Katrina and their daughter, Jennifer, the group continued its growth in Orthodox worship until it was able on August 29, 2004 to progress from a biweekly Sunday evening Vespers to a biweekly Sunday morning Divine Liturgy instead.

On October 28th, attended by other Orthodox clergy, faithful members, friends, and visitors, Archbishop Demetri made his first visit to Edenton to bless the building and to bestow on the Mission Station the name of St. George's. On December 2nd, weekly Sunday services began in the new St. George's Orthodox Church, along with the other activities of the Mission Station.

While the building is being rehabilitated now, by dedicated volunteers with the goal of a sensitive architectural restoration, services are being held in a temporary sanctuary and nave in the middle portion of the depot. As the work progresses, the temple for worship will be temporarily relocated to the restored west end, while rehabilitation is completed for the adaptive reuse of the east half of the building for a permanent temple.

The interior work will restore the original walls and original high ceilings, both with beaded-board surfaced in various designs. Upon its completion, the east half of the depot will house the temple, including the nave and at the east end the sanctuary with its altar, along with a small office. The west half of the depot will be contain the narthex, refectory, kitchen, and bathroom; and the original exterior clapboard sidings of the building will be restored.

Saint George's Orthodox Church is blessed with the vision and witness of members and friends who provide the stewardship of time, talent, and treasure to the building of the Kingdom of God in Edenton.

St. George's Orthodox Church in the Past
Powered by Orthodox Web Solutions
Home | Back | Print | Top